Right Back Where We Started From by Joy Lanzendorfer

If misfortune hadn’t gotten in the way, Sandra Sanborn would be where she belongs–among the rich and privileged instead of standing outside a Hollywood studio wearing a sandwich board in the hope of someone discovering her. It’s tough breaking into the movies during the Great Depression, but Sandra knows that she’s destined for greatness. After all, her grandmother Vira crossed the country during the Gold Rush and established the Sanborns as one of San Francisco’s most prominent families, and her mother Mabel grew up in a lavish mansion and married into an agricultural empire. Success, Sandra feels, is in her blood. She just needs a chance to prove it.

In between failed auditions, Sandra receives a letter from a man claiming to be her father, which calls into question everything she believes about her family–and herself. As she tries to climb the social ladder, family secrets lurk in the background, pulling her down. Until Sandra confronts the truth about how Vira and Mabel gained and lost their fortunes, she will always end up right back where she started from.

Right Back Where We Started From is a sweeping, multigenerational work of fiction that explores the lust for ambition that entered into the American consciousness during the Gold Rush and how it affected our nation’s ideas of success, failure, and the pursuit of happiness. It is a meticulously layered saga–at once historically rich, romantic, and suspenseful–about three determined and completely unforgettable women.

The image of her mother in her raggedy tea gowns and Gibson hairdo floated in Sandra’s mind like a sunspot. There was so much Sandra didn’t know. Why had her mother left San Francisco in the first place? Her grandparents had died, but Sandra didn’t know the details. And how had Arthur Beard died? Yes, there was an earthquake, but she didn’t know the cause of death. And why had Sandra never inherited any money? Where did it all go? She retrieved the letters from John Hollingsworth from the trash, intending to reread them, and noticed heaviness in one of the envelopes that she’d missed before. Inside was a gray cardboard frame. She pulled up the cover to reveal a picture of Mabel. Sandra’s mouth fell open. In the photo, Mabel was younger than Sandra had ever seen her. She was turned toward the camera, her face at three-quarters profile. Her thick brown hair was swept under a hat and she wore a fur shoulder piece that emphasized a tiny, corseted waist. Even in her confusion, Sandra felt a tickling of pride to see her mother in all her beauty and wealth. On the back was a date stamp: 1904. Two years before Sandra was born. She hated how this was making her feel. She didn’t want to think about any of it. Tomorrow she was going to Central Casting, and she should be focusing on that. This was all a distraction from her plan. Standing, she went to the closet and pulled an orange hatbox from the 24 joy lanzendorfer shelf. It was empty because the hat that was supposed to go in it was still on the costume rack at Rayo Sunshine, along with the dress she’d worn that day. Sandra dropped the letters into the box and shut the lid, thinking that she would ask Mabel about John Hollingsworth later. She didn’t have time right now—she had to get ready for Central Casting—but soon she would find out more. The next time Sandra wrote her mother, she promised herself, she would bring the letters up.

“In Right Back Where We Started From Joy Lanzendorfer has crafted a terrific first novel, one brimming with energy, wit, and emotional resonance. Sandra Sanborn is a wonderful character, very much alive on the page. And, the novel captures, vividly, some of the crazier times in California’s crazy history. Highly recommended!” –Peter Orner, author of Maggie Brown & Others

“Joy Lanzendorfer’s thrill of a novel, Right Back Where We Started From, tells the story of an engaging young woman, eager to be discovered in 1930s Hollywood. But as she looks to the future, a letter from a man who claims to be her father pulls her to the unknown past. This is a novel of California dreaming, from the Gold Rush to the Hollywood Hills. Lanzendorfer writes with charm, style, and great energy.” –Ellen Sussman, New York Times bestselling author of four novels: A Wedding in Provence, The Paradise Guest House, French Lessons, and On a Night like This

“From the California Gold Rush to the San Francisco earthquake, through the Great Depression and World War II, Joy Lanzendorfer artfully weaves a beautifully textured saga. Yearnings, secrets, and shame shape the lives of three generations of American women as they dare to question the rigid societal expectations that confine them to proscribed roles and stifle ambition. Gripping prose and complex and memorable characters make this shining debut novel a pleasure to read.” –Liza Nash Taylor, author of Etiquette for Runaways and the forthcoming In All Good Faith 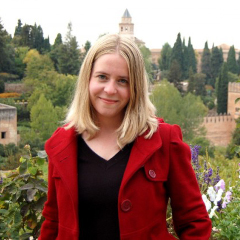 Joy Lanzendorfer’s work has appeared in the New York Times, the Washington Post, The Atlantic, NPR, Smithsonian, Poetry Foundation, and many others. She was included in The Best Small Fictions anthology and was a notable in The Best American Essays 2019. She has been awarded grants and residencies from the Discovered Awards for Emerging Literary Artists, Wildacres Residency Program, and the Speculative Literature Foundation.

Wednesday, May 5
Excerpt at Passages to the Past

Thursday, May 6
Review at Crystal’s Library

Saturday, May 8
Review at Reading is My Remedy

Sunday, May 9
Review at Carole’s Ramblings

Monday, May 10
Review at Rajiv’s Reviews

Tuesday, May 11
Excerpt at Books, Ramblings, and Tea

Wednesday, May 12
Excerpt at Bookworlder

Sunday, May 16
Interview at Reader_ceygo

Monday, May 17
Review at Reader_ceygo
Review at Jorie Loves A Story

Thursday, May 20
Review at Jessica Belmont

Friday, May 21
Review at Nursebookie

Enter to win a copy of Right Back Where We Started From by Joy Lanzendorfer!

The giveaway is open to the US only and ends on May 28th. You must be 18 or older to enter.

Right Back Where We Started From

One thought on “#RightBackWhereWeStartedFrom #JoyLanzendorfer #HFVBTBlogTours”