Then Came the Thunder by Rachael Huszar

Jessalyn Joy loves her husband, but she can’t help the feelings that arose when he volunteered for the Union army. When he comes back to her in a box instead of on his feet, those feelings complicate even more.

Jessalyn’s mourning period is cut short when something begins to attack the livestock in their small town, and greater dangers begin to threaten their provincial life. Thrown together with the new reverend, one of her own students, and a strange man somehow related to her husband’s passing, Jessalyn must find a way to stop the evils that threaten her husband’s first and ultimately last home.

Set in the Southwestern home front, Huszar blends a taste of fantasy into a startling down-to-earth world, creating a high stakes adventure for this strong female protagonist and her band of amateur sleuths.

As if on cue, two more young girls came tumbling up the path, joining Calvin and Caleb in their race around the tree. Jessalyn turned and saw a tall, thin man closing the gate behind him. She recognized him as Jule, the eldest Templeton son.

“Nice to see you, Miss Joy,” said Jule. Jessalyn nodded in return. He reached out and vigorously mussed his sister’s hair. “Lilah.”

“Cut it out!” Lilah said, batting his hands away.

“You joining us for dinner, Miss Joy?” asked Jule.

“Well, you know, you’re always welcome. I’m sure this one would be thrilled,” he said, patting Lilah’s head again. “She talks about you and your lessons non-stop. When she isn’t buried in one of your books.”

“I’m the lucky one who gets to teach a student like her,” Jessalyn said.

“Smart as a whip. I’ve known that since you were a baby,” said Jule, beaming down at his sister. “You’re going to blow them out of the water in college.”

Lilah lowered her voice. “If you could help me convince Mama, I’d be mighty grateful.”

Jessalyn glanced at the kitchen window of the Templeton house, behind which Margaret was surely cooking up a frenzy for her family.

“She’ll come ‘round,” Jule said, reaching his arms above his head, stretching out his back. “You don’t mind me adding the girls to your pack, do you? Rose wanted to stop by her folks’ before she came here.”

“No trouble,” said Lilah. They all turned back towards the group of children. The race had given way to another game. Both of Jule’s daughters had their skirts hitched up around their knees and were struggling to find footholds on the trunk of the old tree. Calvin and Caleb cheered them on. Meanwhile, Emmy had rolled off her blanket and was dangling her chubby legs off the edge of the porch.

Jessalyn gulped. In a few years, all five of them would be her students.

“Annabelle! Easter!” Lilah bellowed. “The boys aren’t allowed in that tree and neither are you! You wanna break your neck?” Caught in the act, both girls dropped back to the ground. One of them began theatrically crying. “Don’t you give me those crocodile tears, Annabelle, I taught you how to do that.” The crying ceased. Lilah put her hands on her hips. “Caleb, Calvin, play nice with your cousins. And watch Emmy!”

As the children resumed their play, Lilah turned back to the adults.

Jule’s eyes were wide. “Well, now I know why they always want Grace to babysit instead of you.”

Lilah smacked his arm. “Hush. Did Charlie and Papa come back from the ranch with you?”

Lilah clapped a hand over her mouth.

“That’s terrible,” said Jessalyn. She hadn’t heard any rumors of sickness among the cattle, which sometimes spread in the summer heat. This must have been something else. “Two more? You’ve lost some previously?”

Jule nodded. “Us and most of the other ranches. We used to lose maybe three a year between all of us, which is just natural, but this . . .” he trailed off.

“Was it the same way as before? An attack?”

“What could be doing this?” asked Jessalyn.

“Papa thinks it’s some wild animal. Maybe rabies are making it do weird things, like kill, but not eat the meat,” Lilah said. “They just leave it there.”

“We’ve started having night watches around the ranch lands, but so far, no one’s seen anything,” said Jule. “My father figured it was time to make a formal report. If anyone can rally the town together to figure this out, it’s Mayor Carson.”

“Of course,” Jessalyn said. Her mind had already formed the image of a sickly coyote, lolling tongue and glowing eyes, staking out the Three Willows’ cattle in the dead of night. Hopefully the mayor would be able to take care of it quickly, if he was done meddling with Jessalyn’s social life.

The front door of the Templeton house swung open and Margaret strode onto the porch. Her apron was spattered with the colors of cooking, and what looked like a potato peeling clung to her graying blonde hair. She surveyed the scene in front of her house. “Jessalyn,” she said shortly.

And that was the end of the conversation. “Jule,” Margaret said to her son, “stop loafing out here in the yard, come inside. Lilah, round up the kids and start getting them washed. There’s plenty to do before dinner.”

“Yes, Mama,” chorused Jule and Lilah. Lilah gave one final wave to Jessalyn before hurrying off to gather the children. With one more nod to Margaret, Jessalyn turned and headed for the gate.

Despite Jule’s insistence, Jessalyn knew that, no, she was not always welcome at the Templeton house. 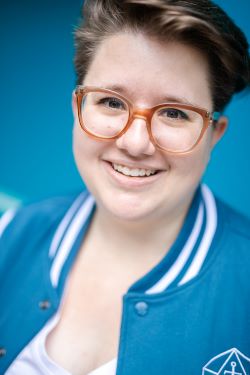 Rachael Huszar kept her life steeped in stories from a young age, and she began her own journey in story-making when she reached adulthood. In the time since, she has taken up swimming, roller skating, and consuming tabletop RPG streams. She spends the bulk of her time with her dog, Silo, and works full time as a designer in Dallas, Texas.

Friday, July 30
Review at Bonnie Reads and Writes
Excerpt at Reading is My Superpower
Excerpt at Books, Ramblings, and Tea

Monday, August 2
Interview at Passages to the Past

The giveaway is open to US residents only and ends on August 16th. You must be 18 or older to enter.

Then Came the Thunder